In the hallowed halls of Dodger Stadium hangs a notable picture. It’s a team photo of the 1955 World Champion Brooklyn Dodgers—the first team to win it all for the organization and the only Dodger team to do so in Brooklyn. You wouldn’t know just by looking at it, but ask a Dodger fan who knows more than they should and they would tell you there’s a player missing from the picture:

A left-handed pitcher by the name of Tommy Lasorda.

After losing Roberto Clemente to Pittsburgh in the Rule V Draft, the front office knew better than to make the same mistake twice. The Dodgers cut Lasorda and promoted a promising young left-hander with a wicked curveball from their farm system — that young man wore the name “Koufax” on the back of his jersey.

Still, Tommy’s career would continue with the Dodgers organization.

He served as a scout, a manager in the minors, a third base coach, and then served as the Dodgers skipper from 1976 to 1996. He spent the remainder of his life as Vice President of the organization and Special Assistant to the President and CEO.

Though Tommy’s legacy is etched in the Hall of Fame for his success as a manager, the end of his playing career won’t go without a footnote from the man himself.

“It took the greatest left-handed pitcher of all time to get me off the team,” Lasorda said.

Quips like this were what made Tommy greater than the sum of his parts. His sense of humor accented his success. His larger-than-life personality stood out more than his waistline. His sid-down-shuddup-‘n’-listen attitude on the field was balanced with ease by his charming Italian hospitality off the field. You didn’t have to know him as “coach” or “Lasorda;” you could call him “Tommy,” and any Dodger fan would know exactly who you’re talking about. These, among a myriad of others reasons, added up to the most respected man at Dodger Stadium. 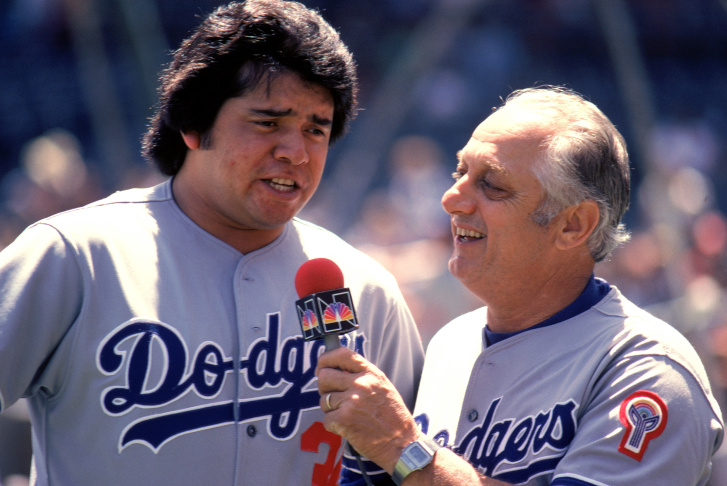 His coaching philosophy seemed simple enough: you work hard at what you love and don’t let anyone scare you into anything different. This philosophy built champions. It fostered a young left-hander from Mexico, who dominated the league his rookie year in 1981, and turned a struggling pitcher from Buffalo into a Bulldog in 1988. Both would go on to be World Series champions. On the field, it was Tommy’s way or the freeway—and if you live in Los Angeles, you don’t want to get caught on the freeway. He won 1,599 games as a manager, picked up four National League pennants, and converted two of those into championship banners.

Though success in Hollywood is known to serve as helium for the ego, it was a common sight to see Tommy talking with everyday fans. He was known for having a lot to say on the field. In the stands, however, he was a man of few words, but they were always kind and welcoming, usually about the game in front of him. Even as a Hall of Fame skipper and a Dodger icon, Tommy remembered his roots and the surreal journey he began in 1949 when he was drafted.

“I’ve been able to dine with presidents, with leaders of corporations, traveled for 14 years with Michael Milton, who has taught me so much about life. Hanging around with them, it’s nothing I could have believed in grade school. I could be with all of them? Milton Berle, Don Rickles, Dean Martin… This former third-string pitcher from the Norristown High baseball team and the son of an Italian immigrant? I really am in awe when I think that has happened to me. What a life.”

Today, Tommy fulfills his promise to go see the big Dodger in the sky. And I have no doubt he’s getting ready to watch his reigning World Champion Dodgers play from the best seat in the house.